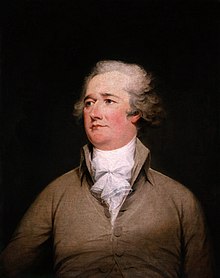 Alexander Hamilton in a 1792 portrait by John Trumbull

A new U.S. federal government began operating in 1789, following the ratification of the United States Constitution. The previous central government under the Articles of Confederation had been unable to levy taxes; it had borrowed money to meet expenses and fund the Revolution, accumulating $54 million in debt. The state governments had amassed an additional $25 million in debt. Secretary of the Treasury Alexander Hamilton sought to use this debt to create a financial system that would promote American prosperity and national unity. In his Report on Public Credit, he urged Congress to consolidate the state and national debts into a single debt that would be funded by the federal government. Congress approved these measures in June and July 1790.

A source of government revenue was needed to pay the respectable amount due to the previous bondholders to whom the debt was owed. By December 1790, Hamilton believed that import duties, which were the government’s primary source of revenue, had been raised as high as feasible. He therefore promoted passage of an excise tax on domestically produced distilled spirits. This was to be the first tax levied by the national government on a domestic product. Whiskey was by far the most popular distilled beverage in late 18th-century America, so the excise became known as the “whiskey tax.” Taxes were politically unpopular, and Hamilton believed that the whiskey excise was a luxury tax and would be the least objectionable tax that the government could levy. In this, he had the support of some social reformers, who hoped that a “sin tax” would raise public awareness about the harmful effects of alcohol.The whiskey excise act, sometimes known as the “Whiskey Act”, became law in March 1791.

Intemperance Whiskey Rebellion 1794 cigars pay tribute to the historic protest against the tax on spirits imposed by Alexander Hamilton to pay back the Revolutionary War debt.

Today we take a look at the Hamilton.

Appearance: This  is a really nice looking cigar. It is a dark brown colored stick with 1 white band and 1 black band which contrast nicely against the dark backdrop. It looks lighter in the photos than it actually is. The Habano Ligero (Ligero is one of the highest primings in terms of tobacco leaves) really comes together nicely and gives a nice oily presentation.Small veins and tight seams run through the cigar but what is interesting with this cigar is that the wrapper stops just short leaving the Indonesian binder exposed. This is a very nicely constructed cigar. No flaws or blemishes anywhere. The cap rounds things out nicely on top.

Pre-light: This is a short but full cigar that feels solid with no soft spots anywhere. The notes I pick up from the foot at cedar wood, barnyard hay, and earth. I used my Colibri V-cutter to open things up and the cold draw offered a little resistance but for a cigar this size made with a thick ligero wrapper that burns slowly, I expected it. Not a hard draw at all but certainly not wide open. From the draw I pick up a little pepper, cedar and a earthy notes.

First Third: I used wooden matches to kick things off and after burning through a couple to get it nice an toasted, we were off and running and never looked back. Right off the bat I got a nice mouthful of thick smoke and notes of wood (cedar, hickory blend), white pepper and a slight raisin like sweetness. The sweetness was very faint but appeared every now and again. I have seen others say that they experienced a dried fruit sweetness so I would say that is probably pretty accurate. For me, it was subtle but there. The draw still offers some resistance but not bad and man this thing is producing a LOT of smoke.

Second Third: As with the previous (Mcfarlane) I smoked, consistency certainly shows through with this blend. The size offers some difference but overall the flavor profile is very much the same. I am picking up a little coffee or espresso mixed in with the heavy wood flavors. So far, this is certainly a full bodied cigar and you need to take your time with it for sure. Don’t let the size fool you, it packs a punch. (Get your minds out of the gutter, and I expect credit if you use this as a pick up line…pics or it didn’t happen!) Anyway…where were we? Oh yeah, full bodied and full flavored. The ash is holding on with no signs of falling off.

Final Third: Not much in the name of change as I transition into the final third of this smoke. More of the same goodness that kicked things off. I am still getting a lot of smokey wood, the subtle sweetness, some espresso and a touch of pepper here and there. For a short cigar, I am already 1 hour in and this ligero wrapper is really showing off. Slow and steady burn and a little bit jagged. I am really enjoying this cigar and I want to keep take puffs from it but it reminds you quickly that you are dealing with a full bodied smoke.  After 1 hour 15 minutes I regretfully come to the end of this cigar.

Pairing and Final Thoughts: Since I had the Mcfarlane before and these cigars have been very consistent so far, I decided to add a little Elijah Craig bourbon into the mix. This was a great choice as the bourbon really intensified the spice in the cigar but was soon met with the sweetness of the caramel in the bourbon and the subtle sweetness in the cigar making for a wonderful blend of flavors on the palate. Each sip seemed to cause the smoke to just melt into my mouth. I really enjoyed this combo. I will certainly try each one I have left with a different scotch or bourbon. I think Four Roses and Angels Envy would make a great pairing as would Monkey Shoulder. We shall soon see.

My final thoughts on the Hamilton was this is a great cigar. The construction is incredible, the performance was solid, draw was slightly resistant but offered no issues, the burn was a little jagged but required no touch ups. Keep in mind that in the photos, it is sunny out, but it is 25 degrees outside. I am very glad it felt like 50 in the sun but cold and dry usually cause issues for most cigars. That didn’t happen with this cigar. The flavor profile was solid. A lot of wood, coffee, earth, subtle sweetness like raisin or dried fruit, and pepper. This is my second Whiskey Rebellion and I am really looking forward to trying the other sizes. I would certainly add these into my rotation and I am certainly going to pick up more shortly. These are exclusive to Famous Smoke Shop and the Hamilton sells for $166.99 for a box of 30. That’s $5.56 a piece and very much worth it at that price point. Of course Famous has many discounts and sales available. I recommend getting the Whiskey Rebellion 5 pack sampler so you can try them all if they are available. Click the link here for more info. https://www.famous-smoke.com/search?kw=intemperance%20whiskey%20rebellion%201794

I hope you enjoyed this review and as always, feel free to leave your comments, thoughts and your reviews here. Until next time, long ashes and full glasses friends. Peace.