It’s whiskey Wednesday Hawks, and boy I’m excited for this one. Starting today and for the next few weeks I will be reviewing the Blanton’s bourbon line. A little background on Blanton’s bourbon…It comes from the Buffalo Trace distillery and was made by Master Distiller Elmer T. Lee in honor of Colonel Albert B. Blanton, who was previously a Master Distiller at Buffalo Trace. We will start this week off with the original Blanton’s Single Barrel bourbon, and then continue with the Gold, Special Reserve, Black, and Straight From The Barrel editions. There are obviously a few of the releases that I have left out, however I still haven’t had the luxury of getting my hands on any of these. They include the, Red, Silver, and various France releases. 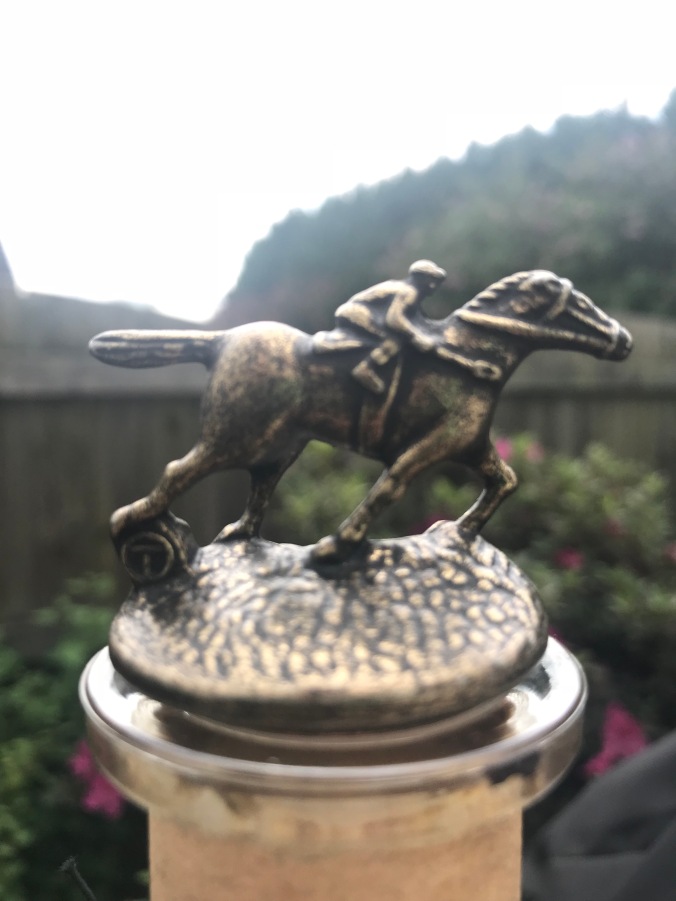 Each bottle of Blanton’s is noticeable from a distance, due to its grenade shaped bottle, and horse and jockey on top. Each of the toppers has become collectable in its own way, as each of them has a different letter on it that spells B-L-A-N-T-O-N-S once you’ve collected all of them. Specialty companies have even made topper displays, such as the one pictured.

The mash bill on this bourbon is Buffalo Trace’s mash bill #2, which has the higher rye content. However, BT doesn’t disclose the exact mash bill.

ABV on this variation of Blanton’s is 93 proof. More than enough to get the job done, if you know what I mean.

The color sits at a dark amber with hints of red and burgundy.

At 49 to 65 dollars a bottle, Blanton’s is not the cheapest pour on the shelf, but it’s not insane either. The biggest issue you will have with this bourbon is finding a bottle. Not even 10 years ago I remember going in the store outside of Fort Campbell and literally wiping dust off bottles of Blanton’s. You could have found it anywhere at any time. Fast forward to present day and the bourbon boom is in full swing. I have now only been able to find three bottles of regular Blanton’s in two years, and two of those were behind the counter and I had to ask. Thankfully I have built up somewhat of a relationship with my local ABC employees.

The nose on this bourbon is great and one of the best I’ve nosed. Notes of citrus, clove, nutmeg, all spice and raisin. The spicy smell from the rye is not extremely overpowering, but reminds me of the holidays.

The taste is similar to the nose. It’s well balanced with citrus, spice, and vanilla notes. There is a sweeter caramel and toffee taste on the front, and a spicy cinnamon taste on the back.

The finish on this bottle was medium to long. Oak, toasted marshmallow and nutmeg wrap this pour up in a nice package.

My final thoughts on this bourbon are that if you can find a bottle of Blanton’s, give it a try. I wouldn’t say it’s my favorite bourbon, but it’s in my top 20 for sure. It’s definitely a great bourbon for parties and conversation starters. The bottle is cool, and I’ve seen a ton of crafty ways to reuse the bottles.

I didn’t require ice or water with this bourbon and tasted it using my Glencarin glass.